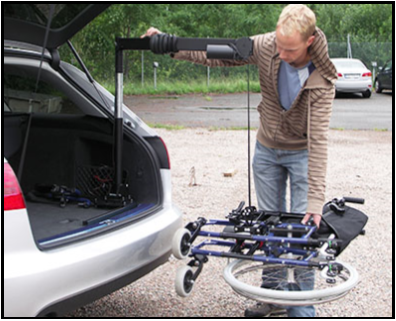 Jeffery and Moira are in their 70s, they still lead a very active lifestyle and participate in many community events. Jeffery is still considered able, but he suffers from chronic back pain and uses the aid of a scooter to get from place to place to minimise his pain. His scooter is small, portable and relatively light. Due to Jeffrey’s back pain, he is unable to load the scooter into the rear of their SUV. This means that Moira is loading and unloading the scooter, this is causing strain on Moira’s back  and she is unable to sustain this much longer without a lifting aid.

Jeffery and Moira have booked an appointment at our Assessment Centre with one of our Mobility Solutions team members to view and trial the various options available for hoisting and stowing Jeffery’s scooter with minimal effort. The following is what we presented to Jeffery and Moira to ease the effort involved in getting the scooter into the vehicle so that they can continue to participate in the activities they love!

Portable ramps are lightweight, cost-effective and easy to use. The portable ramps we would recommend for Jeffrey and Moira are telescopic and won’t take up too much room in the rear compartment of their vehicle.

This option would mean that Moira can simply guide Jeffrey’s scooter up the ramps, using minimal effort.

Portable ramps mean that they can be moved from one vehicle to another, with no vehicle modifications required.

The Carolift 40 is a crane type hoist with a powered lift function, engaged by a single switch on top of the lift. Once the weight of the scooter is in suspension by the lift, the user simply guides the scooter into the rear compartment.

The Carolift 40 will give Jeffrey the freedom to be in the community independently for many years to come.

After reviewing and trialling the available options Jeffrey and Moira chose Option 2, the Carolift 40. This solution creates independence and freedom for both Jeffrey and Moira. This option, though more expensive than the ramps, suits the couple’s needs and lifestyle, and will provide a long-term solution.

While the portable ramps are a good option in the short-term for Moira to be able to load and unload Jeffrey’s scooter, they do not allow Jeffrey to use these independently.

We are a provider of well engineered products and services.